Florida Chapters
The Story Behind The Flag

You see it everywhere--the stark, black-and-white POW/MIA flag—flying in front of VA hospitals, post offices and other federal, state and local government buildings, businesses and homes. It flaps on motorcycles, cars and pickup trucks. The flag has become an icon of American culture, a representation of the nation’s concern for military service personnel missing and unaccounted for in overseas wars.

From the Revolution to the Korean War, thousands of U.S. soldiers, Marines, airmen and sailors have been taken prisoner or gone missing. But it took the Vietnam War and a sense of abandonment felt by wives and family members of Americans held captive, to bring forth what has evolved into the nation’s POW/MIA symbol.

The POW/MIA flag is inextricably tied to the National League of POW/MIA Families, which was born in June 1969 as the National League of Families of American Prisoners in Southeast Asia. Its mission was to spread awareness of the mistreatment of prisoners of war at the hands of their captors. It was the brainchild of Karen Butler, wife of Navy pilot Phillip Butler, who had been shot down over North Vietnam in April 1965, and Sybil Stockdale, whose husband, Navy Commander James Bond Stockdale, was the highest-ranking POW in North Vietnam. Stockdale had been held prisoner since September 1965, when his A-4 Skyhawk went down over North Vietnam.

One day in 1971, League member Mary Hoff read a story in the Jacksonville Times-Union about Annin & Co., the flag maker who had refused to produce flags for the Chinese communists to display at the United Nations. She came up with the idea of creating a flag as the group’s symbol. Her husband, Navy pilot Lt. Cmdr. Michael Hoff, had been missing in action since January 7, 1970. Hoff then reached out to the country’s oldest and largest flag maker, Annin Flag makers of Verona, N.J.

”I had no idea what the League of Families was when she called,” Norm Rivkees, then Annin’s vice president of sales, said. “She then explained everything and I went to our president, Randy Beard. There was no hesitation. He just said: ‘Absolutely. We would be honored to create a flag.’”

Rivkees turned over the job of designing the flag to Annin’s small advertising agency, Hayden Advertising, where the task was assigned to graphic artist Newton F. Heisley to design the emblem.

Heisley, who died in 2009, had served in World War II as a C-46 twin-engine transport pilot with the 433rd Troop Carrier Group. After coming home from the war with a Bronze Star, he received a degree in Fine Arts from Syracuse University and worked as a graphic artist at the Pittsburgh Post Gazette before going to work for Hayden. After getting the POW/MIA flag assignment, Heisley sat down at his drawing table and sketched three different designs. The one he chose had an image of a gaunt man in profile, with a guard tower and a strand of barbed wire in the background—the design that we recognize today.

When Annin began producing the flag, Heisley was still tweaking its design. He planned to add color to the black-and-white image, but those ideas were dropped. Heisley modeled the flag’s silhouette on his 24-year-old son, who was on leave from the Marines and looking gaunt while getting over hepatitis. Heisley also penned the words that are stitched on the banner, “You are not forgotten.”

As Heisley told the Colorado Springs Gazette in 1997, the flag “was intended for a small group. No one realized it was going to get national attention.”

The first flags were actually hanging, vertical banners like the blue and gold star-adorned banners of World War II. They were sold out of Hoff’s home. She took the banner to a local meeting of the National League of Families of Prisoners of War and asked them what they thought about it, then they took it to the state group and that’s when they turned it into a flag.

It took nearly a decade, but the POW/MIA flag began getting attention in a big way in the early 1980s. In 1982 it became the only flag, other than the Stars and Stripes, to fly over the White House, after it was first displayed there on POW/MIA Recognition Day. In 1989 the flag was installed in the Capitol Rotunda.

It also has the distinction, historians and flag experts believe, of being the only non-national flag that any federal government anywhere in the world has mandated to be flown regularly. That began with a 1990 law to recognize the POW/MIA flag and designate the third Friday of September as National POW/MIA Recognition Day.

In 1998, Section 1082 of the Defense Authorization Act—codified as Title 36, Section 902 of the U.S. Code—mandated that the POW/MIA flag be flown over the Capitol, the White House, the Korean and Vietnam Veterans Memorials, the offices of the secretaries of State, Defense and Veterans Affairs, of the Selective Service System, and on the grounds or in the lobbies of every major military installation, every post office and all VA Medical Centers and national cemeteries on six days: POW/MIA Recognition Day, Armed Forces Day, Memorial Day, Flag Day, Fourth of July and Veterans Day.

Since then, some states have passed laws that also mandate flying the POW/MIA flag. Oregon, for example, requires that the POW/MIA flag be flown on or near the state capitol on the same holidays as the national law. In Washington, a 2002 law requires every state agency, every state institution of higher education, and every county, city and town to display the flag on the same six holidays. Florida requires the flag at state parks year round. Arizona enacted a law requiring the POW/MIA flag to be flown over every town and city hall, Superior Court building and county office on the designated holidays. And in 2011, Idaho became the first state to require that the POW/MIA flag be flown over all state buildings, 24 hours a day, seven days a week “or until such time as all our unaccounted for and missing members of the Armed Forces return.”
Rolling Thunder National Constitution
Nationwide, each Chapter of Rolling Thunder®, Inc. is regulated by a National Constitution. Click on 'Download File' to read this document. You will need to have Adobe® Acrobat Reader installed on your computer in order to read the file.

Download File
Rolling Thunder began as a demonstration following the era of the Vietnam War, which was a difficult time in America's history. Similar to today's political climate, our nation was divided over issues of peace and war. However, many of America's military were killed or missing in action and their remains were not being brought home to be respectfully buried and honored. In 1988, veterans of the Vietnam War rallied together their families, fellow veterans, and veterans' advocates to organize a demonstration at the Capitol Building in Washington, DC during the Memorial Day weekend. They announced their arrival with the roar of their Harley-Davidson's, a sound not unlike the 1965 bombing campaign against North Vietnam named Operation Rolling Thunder. Approximately 2500 motorcycles participated in this rally, demanding that the U.S. government account for all POW/MIA's. The group became known as Rolling Thunder and each year since has held an annual "Ride for Freedom" to the Vietnam Veterans Memorial Wall.

Rolling Thunder was incorporated as a class 501 (C)(4) non-profit organization and today has more than 90 chapters throughout the United States, Canada, Australia and Europe. The group is actively involved year-round in promoting legislation to increase veteran benefits and resolve the POW/MIA issue from all wars. They also provide financial support, food, clothing and other essentials to veterans, veterans' families, veterans groups, and women's' crisis centers.

Rolling Thunder® Inc. Florida Chapter 1 is a not-for-profit veteran advocacy organization, charted under IRS code 501(c)(3). A copy of the official registration and financial information may be obtained from the Florida Division of Consumer Services by calling toll-free within the state. Registration does not imply endorsement, approval or recommendation by the state. The registration number issued by Florida Department of Agriculture & Consumer Service is CH40989 . The toll free number is (800) 435-7352, and their website is http://www.800helpfla.com.

All of the events we organize and attend are made possible by the efforts of our volunteer members. We are not a motorcycle club, or a veterans fraternity, and you do not need a motorcycle to become a member. Our membership is balanced between men and women, motorcycle riders and non-motorcycle riders, veterans and non-veterans. All of us have a common goal - bring our missing home, and care for those veterans that need help.
We meet on the 4th Sunday of each month at the
Veterans Memorial Center and Museum
400 S. Sykes Creek Parkway
Merritt Island FL
at 2:00 P.M.
Our NEXT meeting will be at 2:00 pm Sunday, July 25, 2021 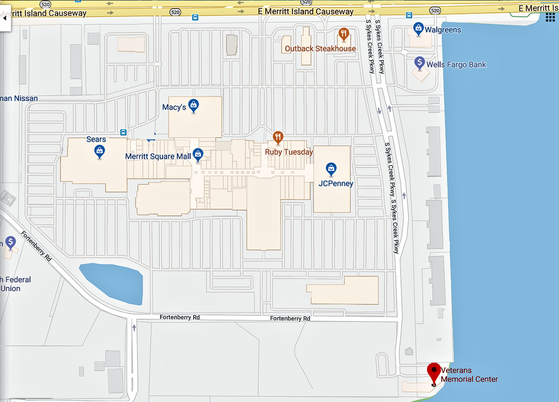 The Veterans Memorial Center/Park/Museum is located at the south end of Sykes Creek Pkwy, off of SR-520 on Merritt Island.