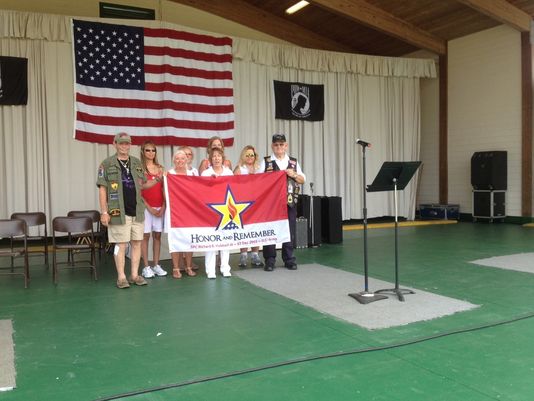 After her son was killed in Afghanistan, Jeannie Weaver received a Gold Star pin from the Department of Defense. She also later learned about American Gold Star Mothers Inc., an organization of mothers who lost son or daughters in service in the military, but wasn’t immediately drawn to the group. “I was not ready to be a part of an organization,” Weaver said.

“Time has allowed me to process this state of being and I am now ready to go forward to offer fellowship, compassion, and support to other Gold Star moms, as well as to our veterans and their families,” said Weaver, of Cocoa Beach.

The members of American Gold Star Mothers support each other and honor their sons and daughters through service to others, primarily to veterans. There are seven chapters in Florida with 225 mothers.

Bob Cooper, former state liaison for Rolling Thunder®, Florida Chapter 1,  said he wanted to contact American Gold Star Mothers before finding out that there was not a chapter in Brevard County.  So he contacted Jeannie Weaver and others to encourage them to start a chapter.

“They got enthused about it,” he said. “Now they are on their way. We’ll be a supporting arm for that chapter.”

It is the kind of support Karen Watson was looking for when she was invited to be a part of the group being formed. “I’m really grateful that something is being done in Brevard,” said Watson, a Rockledge resident. “You don’t have to be alone in this.” Watson, whose son, Zachoriah Gentry Williams, 24, died in an accident while helping a fellow service member shortly before he was to deploy to Afghanistan, said she could not find anyone to talk with who really understood her loss. “We don’t have to be alone any more,” she said. “I think this will be good for Brevard County. It’s nice to know I have phone numbers and can talk to them.” Williams, who was serving in the Connecticut National Guard, was killed in the accident when he stopped to help another service member in uniform on Interstate 84 during a storm.

Jo Ann Maitland’s son, Richard B. Hubbell III, died in a motorcycle accident Dec. 3, 2002, in Killeen, Texas, while serving in the Army assigned to Fort Hood. She started the Treasure Coast chapter of American Gold Star Mothers in Stewart and now is president of the organization’s Department of Florida. She said the organization’s members help each other by knowing others are there for them. They also involve themselves in service work. It has been a lot of support to her and others over the years. “Looking into the eyes of another mother who has lost a son or daughter, there is an instant understanding,” she said. “There is nothing like being with another Gold Star mom.”

For more information about American Gold Star Mothers and the chapter being formed, call Weaver at 321-613-2403, or email Maitland at Mait1sp@aol.com.