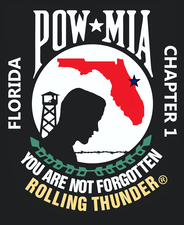 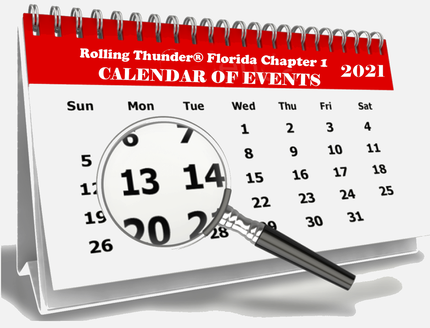 Our Calendar of Events is where you can find upcoming events that Rolling Thunder® Inc., Florida Chapter 1 may participate in. Those dates preceded by a RED asterisk indicate that the event is an official Chapter 1 event. It is also a great resource to find other veteran activities. If you, or your organization would like to publish your special events on our calendar, just click here, or on the "Contact" menu item on the left, fill out the form and hit the 'submit' button.
<
>
January 09. 2021: 1600-2000 hours. Inaugural  Scout and Veterans Memorial Center Retirement Ceremony at the Veterans Memorial Park. Numerous groups of Scouts  participating.  The Pit is the result of an Eagle Scout Project by Jacob Huff of Merritt Island.
January 30, 2021:  0800-1900 hours. Special Event:  “Legions of Service” Veterans Memorial Park in honor of veterans and active duty service members. Multiple activities during the day including the Zybek Athletic Combine; Star Wars Immersive Fan Experience; Gift of Music Concert;  OASIS of Central Florida Valentines Day Package Stuffing for deployed troops abroad; Food Bazaar of trucks and more.  Additional details in mid-January.  Similar special events to be held 4-5 times during 2021 in the expanded and improved Veterans Memorial Park.  Contact Donn Weaver at VMC for more information.
* February 07, 2021: 1400 - 1500 hours. Commemoration Ceremony of honor the Four Immortal Chaplains of WWII at the Veterans Memorial Center Memorial Plaza. The Story of the sinking of the USAT Dorchester on February 03-04 1943 is told as we honor the four Chaplains who gave up everything to help soldiers and sailors who had to abandon ship in the frigid North Atlantic as well as all Military Chaplains in our history since the Revolution when George Washington appointed the first Chaplain.
* February 11, 2021: 0900 - 11:30. POW*MIA flag raising at Manatee Elementary School, 3425 Viera Blvd, Viera, then Viera Elementary School, 8300 Stadium Parkway, Viera. Come join us. Florida Chapter 1 is committed to raising a POW*MIA flag at ALL of the 82 Brevard County Public Schools between now and the 15th of May.
* February 18, 2021: 11:20 AM. Funeral Escort for Leward Mooso. Stage at Sam's Club, 450 Townsend Rd, Cocoa, FL 32926. Dress - white shirts, black trousers. Leward Mooso was a veteran and the father of RTFL1 member Grace Bowers.
Depart at 11:30 a.m. to escort Leward’s cremains and the family to Cape Canaveral National Cemetery, 5525 US-1, Mims, FL 32754. Internment ceremony at 12:30 p.m.
This is an official RTFL1 event. Rolling Thunder® is not a motorcycle club.  All members are encouraged to attend.
* February 28, 2021: 1400 hours - General Membership Meeting at the Veterans Memorial Center.
March 06, 2021: 1600 - 2000 hours. The Space Coast Food Festival at the Veterans Memorial Center and Veterans Memorial Park.  Sponsored by the Cocoa Beach Regional Chamber of Commerce. This popular community event has been held at the Port and other large venues.  There is room for organizational tables and canopies as well as good entertainment and great food to sample.  Point of Contact is Darby Miller of CBRCC (321) 784-6444.
* March 13, 2021: 1000 - 1130 hours. The Last Naval Battle of the Revolutionary War Ceremony at the Veterans Memorial Center. Sponsored by the Brevard Chapter of the Sons of the American Revolution. Held in the VMC Plaza area, Museum  and Gray Hall.  Commemorates the final 1783 Naval Battle of our War of Independence fought off the coast of Cape Canaveral.
March 13, 2021: 0700 - 1200. Marine Corps JROTC Central Florida Raider Challenge at Veterans Memorial Park (0700-1200) .  Palm Bay JROTC Marine Unit will host and coordinate with other Marine JROTC units from surrounding counties expected to join them.
* April 12, 2021: 1800 - 2000 hours. Presentation of Memorial Wreaths at The Wall and Reunion Opening Ceremony.
April 15 - 18, 2021: Vietnam and All Veterans Reunion - Wickham Park, 2500 Parkway Drive, Melbourne, FL 32935
April 17, 2021: 0730 - 1400 hours. Annual Good Deeds Foundation of the Military Officers Association of America (MOAACC) Golf Fundraising Tournament at the Cocoa Beach Country Club.  This tournament funds MOAACC Good Deeds Foundation support to all JROTC and related units in the county; active duty military needs not covered by DoD; and support to veterans in urgent need.
April 21, 2021: Leesburg Bikefest. Notably, it is held on 30 blocks in downtown that is set aside just for the motorcycle event. And even better is that Main Street is open only for motorcycles during the Leesburg Motorcycle Rally.
* May 31, 2021: Rolling Thunder® Ride For Freedom XXXIII Nationwide. Event will be held in Leesburg, Florida. Check back for more details.
June 29 – July 3, 2021 | Springfield Expo Center in Springfield, Missouri

Wing Ding is the ultimate Honda Gold Wing & Touring Bike convention! Hosted by GWRRA at different locations across the United States every year, the rides to Wing Ding as well as unique atmospheres are unforgettable. Come join us for a motorcycle convention unlike any other, where you can enjoy the company of friends with live entertainment in a beautiful location, learn more about motorcycle safety, discover all the latest products for your bike, and even test drive a new one.